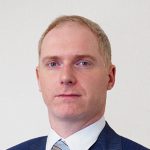 Dr. Scott is a UK and European patent attorney, and Director of International Prosecution at SUGIMURA. His responsibilities include strategic IP procurement in overseas jurisdictions and quality assurance for out-bound patent applications. Dr. Scott joined SUGIMURA from a large patent and law firm based in the UK.

Prior to entering the patent profession, Stephen lived in Japan under the Daiwa-Anglo Japanese Foundation scholarship program. As part of this program, Stephen undertook intensive Japanese language training and completed internships with Mitsubishi Heavy Industries and the Daiwa Institute of Research.

Dr. Scott has a first class degree in Mechanical Engineering and a Ph.D. in simulation of turbulent flows, for which he received a full scholarship. During his Ph.D., Dr. Scott developed significant expertise in the development of mathematical modelling methods and implementation of these methods in parallelised computer codes for high performance computing platforms. This research led to various journal papers and a book published by Springer Verlag.